Brigadier General and actor Jimmy Stewart.
Stewart flew 20 combat missions over Nazi-occupied Europe, and even flew one Mission during Vietnam.

Elizabeth Taylor in 1956 (another WOW)

British Soldiers Returning from the front in 1939

Albert Einstein on a Long Island beach in 1939

Unemployed Lumber Worker and His Wife 1939

Joan Crawford on the set of Letty Lynton, 1932

View from the Capitol in Nashville, 1864

He would pass away just two years later from ALS.

Lee Harvey Oswald, 1963, being transported to questioning before his murder Trial for the assassination of President John F. Kennedy.

Red Hawk of the Oglala Tribe on horseback 1905

An Oklahoman farmer during the great dust bowl in 1939

Louis Armstrong plays to his wife, Lucille, in Cairo, Egypt 1961

Two Boxers after a fight

Seeing these photos in color for the first time makes it easy to imagine we could all have been part of a world that we’ve never even seen.

It literally changes our perspective of history.

This mammoth, historic project is reportedly 96 percent complete and expected to be open for business in the 2nd half of this year.

Here’s an excellent video explaining the operation of the new 3rd Locks:

It never ceases to amaze me the clever solutions engineers can think of. Movable bridges are one such example of man overcoming a body of water with technology. These innovative bridges allow for pedestrians, cyclist and even cars to use the bridge most of the time, but can also quickly move up or to the side, to allow for water traffic to pass through. 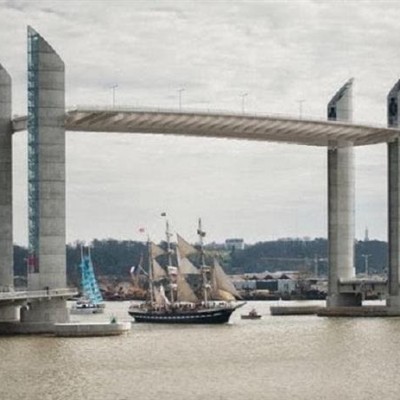 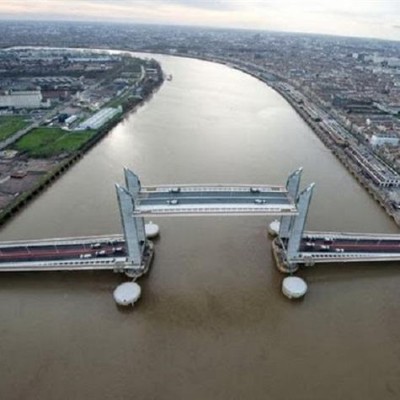 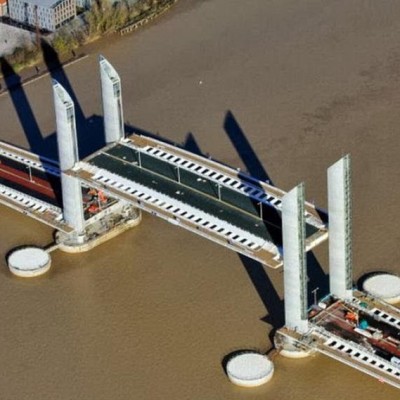 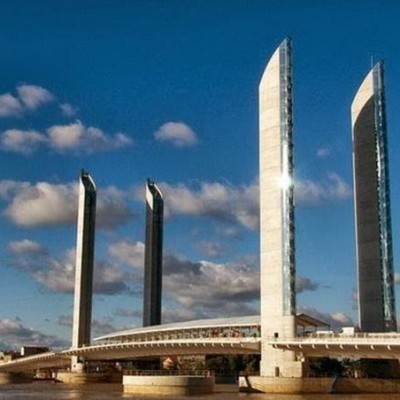 This sophisticated bridge in Bordeaux France can boast the title of Europe’s longest vertical lift bridge, with four traffic lanes and an outboard sidewalk and bicycle lane. The lift structure has four independent pylons towers supporting the span weight, and can lift to a height of 50 meters (164 feet). 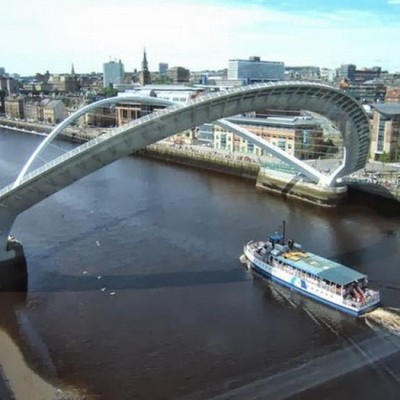 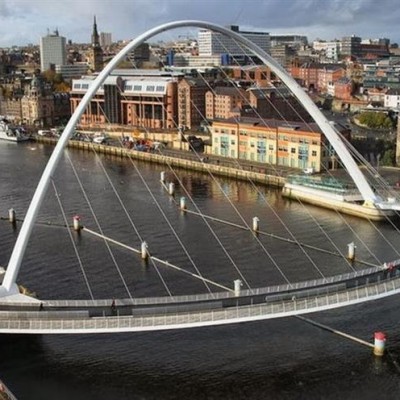 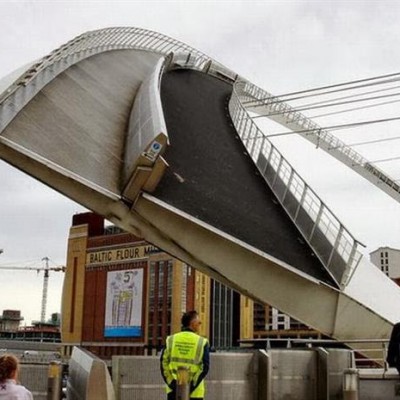 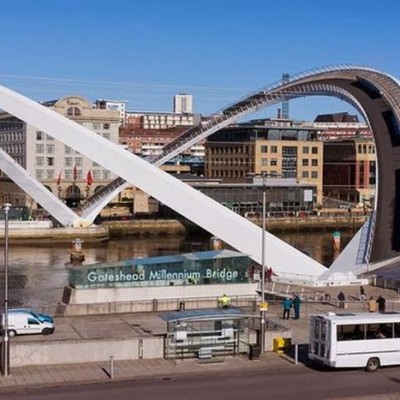 Spanning the River Tyne, this bridge is nicknamed the Winking Eye Bridge because of its eye-shaped look when in motion. The bridge has a deck for pedestrians and cyclists, and a supporting arch. The bridge rotates as a single structure, with the arch lowering and the deck rising, counterbalancing each other, forming a pathway for water traffic. 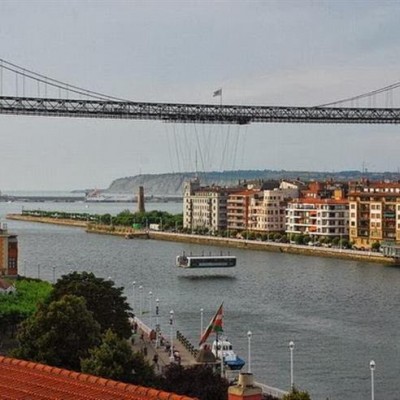 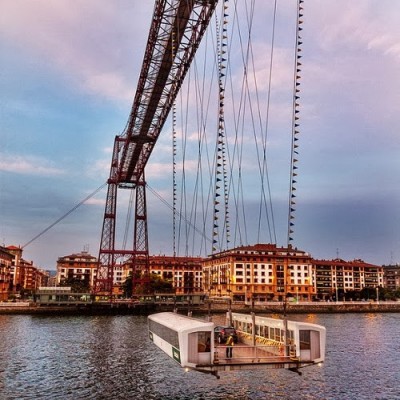 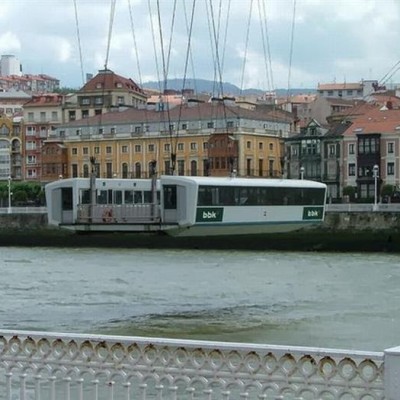 The Vizcaya Bridge in Biscay, Spain connects the two towns of Portugalete and Las Arenas over the Ibaizabal River. The locals refer to the bridge as Puente Colgante, meaning suspension bridge, even though it is a transporter bridge, with a different structure. This bridge also happens to be the world’s oldest transporter bridge, as it was built in 1893. Its gondola can transport six cars, as well as passengers and cyclists. 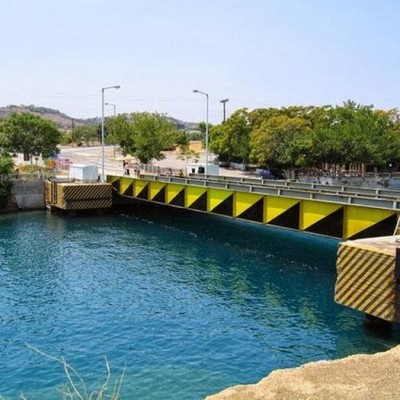 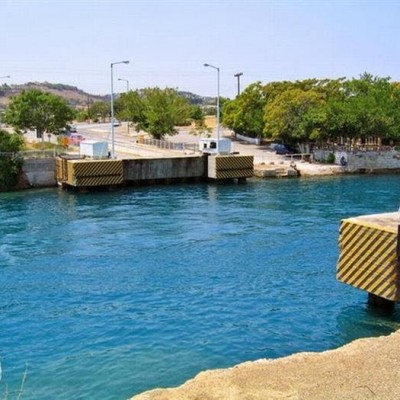 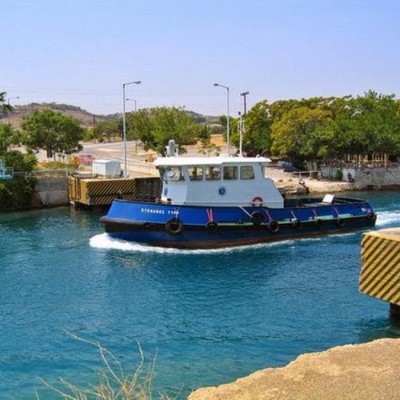 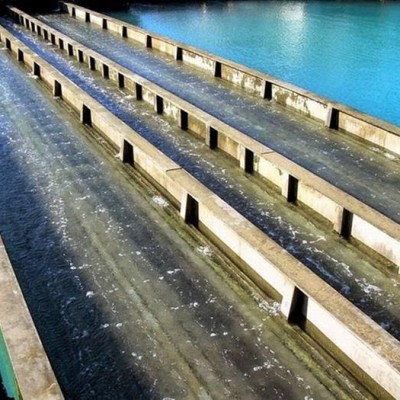 The Corinth Canal was built between 1881 and 1893 and was quite an achievement in its day. The canal went on to save ships a 700 km (435mile) journey because they no longer needed to go around the Peloponnesian peninsula.  It’s very narrow and can only accommodate one ship at a time. The submersible bridges were built in 1988 and their decks are lowered 8 meters (26ft) below the water, allowing for tall shipping vessels to use the canal. 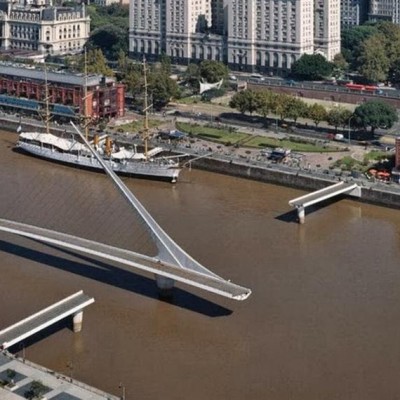 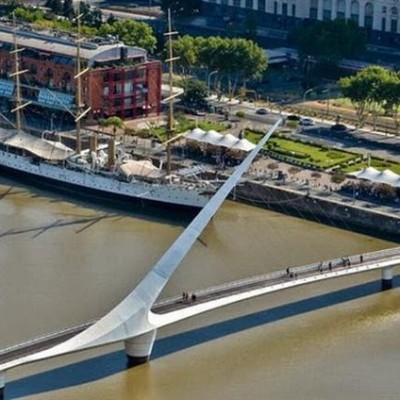 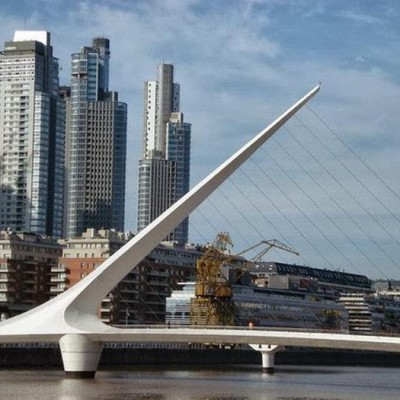 This rotating footbridge in commercial Puerto Madero, Buenos Aires, is known in Spanish as “The Women’s Bridge”. This 800 ton pedestrian bridge has two fixed sections and a middle section which rotates 90 ⁰ in order to allow for the water traffic to pass. 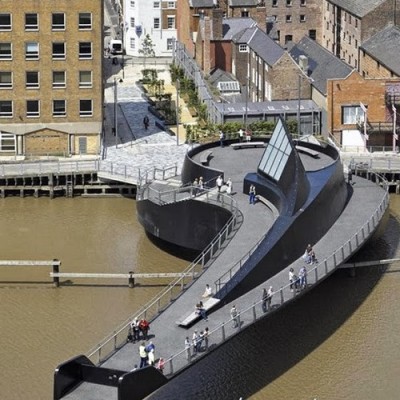 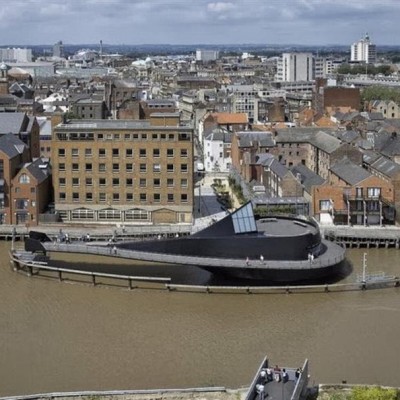 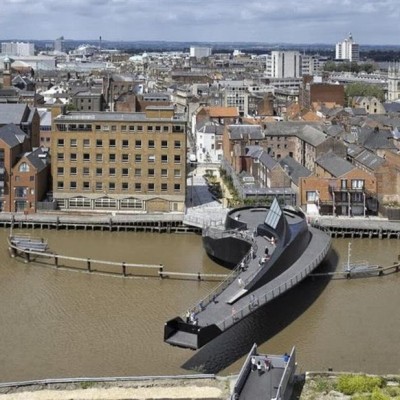 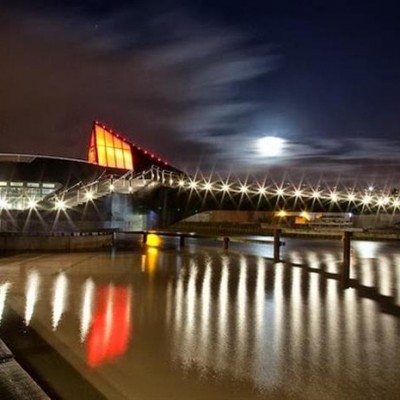 This footbridge in Hull, Yorkshire, is also known as the Scale Lane Bridge. An exciting feature of this bridge is that it rotates while pedestrians are still on it. The bridge takes two minutes to open or close for water traffic and offers pedestrians a unique experience of the city. At night, the bridge’s lights turn on and off while the bridge moves, making for a fascinating light show. 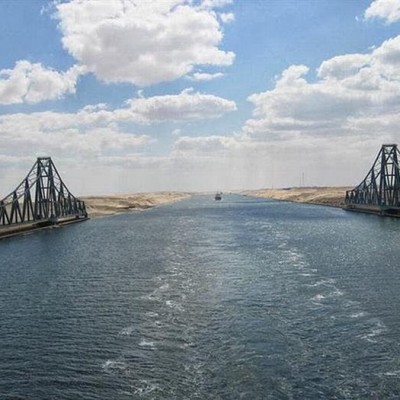 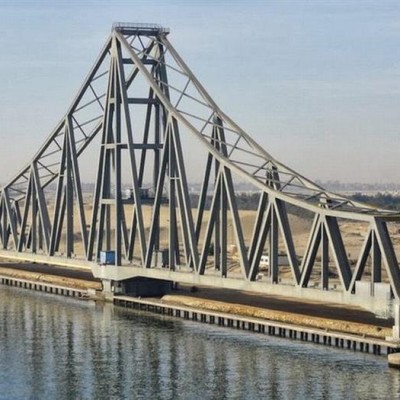 Egypt’s El Ferdan Railway Bridge, resting over the Suez Canal, connects the Sinai Peninsula with mainland Egypt. This bridge is 335m (1,100 feet) and is the world’s longest swing bridge. It takes 30 minutes to open or close. It remains open for water traffic and is only closed when the train needs to cross the canal.

Kiel Germany’s Horn River features a folding bridge, with a three-segment bascule. The innovative bridge folds into an “N” shape. The bridge is nicknamed Klappt-Nix-Brücke, meaning Fold-not Bridge because initially it experienced many malfunctions. 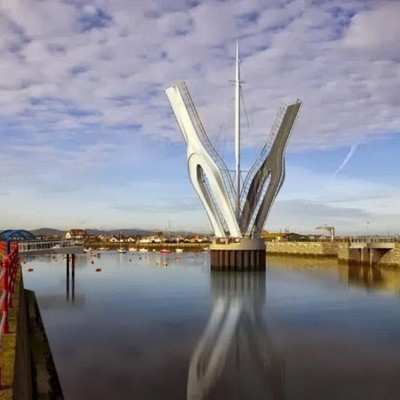 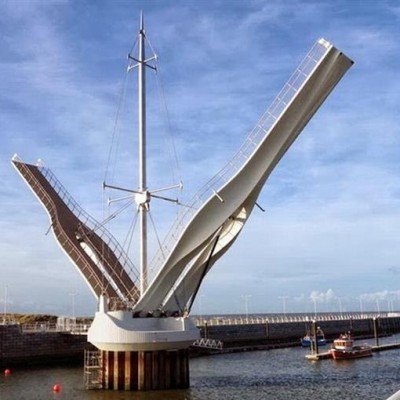 This modern bridge operates a bit like a sailing boat with a mast, rigging system, cables and pulley mechanism. This eye-catching pedestrian bridge is located in the seaside resort town of Rhyl on the coast of Wales. 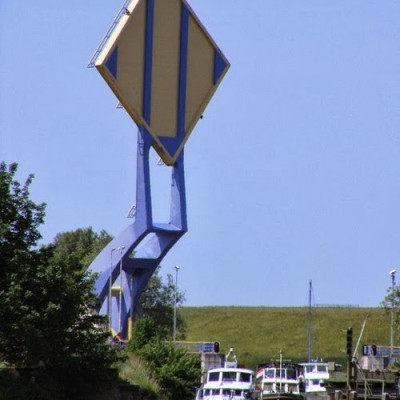 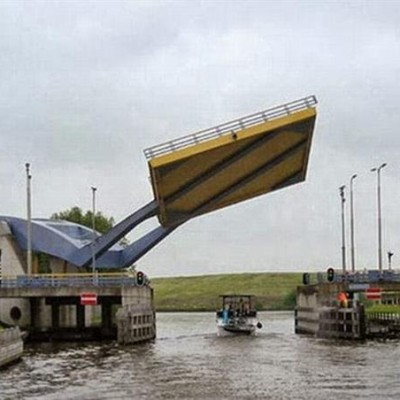 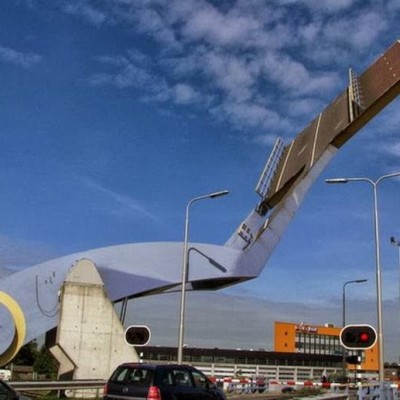 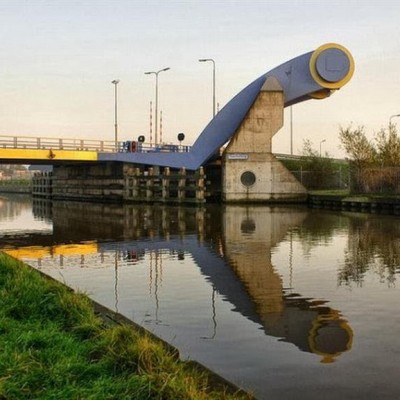 This tail bridge is located in the city of Leeuwarden and is nicknamed the Flying Drawbridge. This yellow and blue automatic bascule bridge has a pylon which can quickly raise the deck, allowing for water traffic to pass, while only briefly delaying road movem