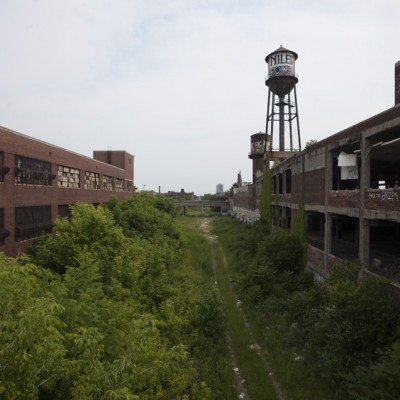 Looking west at Fort and Griswold streets. Today, the Penobscot Building, built in 1928, towers over the corner. The steeple of Fort Street Presbyterian Church in the distance is the only thing that hasn’t changed.

As Detroit’s population has disappeared to the suburbs, many of its houses have, too. This shows how the Jefferson and Conner area has changed from 1949 to 2010.

Looking north up Woodward from Jefferson in 1911 and in 2013. The tall building in the old photo is the Hotel Pontchartrain, which was replaced by the First National Building.

The intersection of Michigan and Lafayette in 1902 and 2013. This block is today renowned for its coney dogs.

Detroit was once home to many more automakers than just the Big Three. Many of them, like the Chalmers Motor Co., are nothing more than footnotes in history and grassy lots on the city’s east side.

The Packard Plant on the city’s east side was once a humming hive of production. Today, it is one of the world’s most notorious urban ruins, though plans are in the works to save it somehow.

As the neighborhood around it has disappeared, St. Albertus Catholic Church remains an anchor at St. Aubin and Canfield on the near east side. The Archdiocese closed the church, but the parish has kept it open. Its steeple is different in this photo, if you’re wondering, because a windstorm toppled it on Good Friday 1913.

For decades, tires were produced in this smoke-belching factory next to Belle Isle. Known later in its life as the Uniroyal Plant, the city bought the shuttered facility in 1981 for $5 million. Four years later, the plant was demolished, opening up a vast stretch of attractive waterfront property — but it was contaminated waterfront property. The site would sit unused and overgrown for almost 30 years, until work to clean up the property finally began in 2011.

The intersection of Martin Luther King Jr. Boulevard and Trumbull, one of many sites of unrest in 1967 in Detroit

Rioters stand off with National Guardsmen at the corner of Hazelwood and Linwood during the 1967 riot. The neighborhood is far quieter — and more empty — these days.

Some areas of the city struck by the 1967 riot have been rebuilt, such as the corner of Goodwin and Westminster.

Detroit was once filled with neighborhood libraries, serving thriving communities. But as the city has cleared out, many of those libraries have been closed, such as the John S. Gray branch seen here.

Like the libraries, the neighborhoods once had a number of fire precincts in them, many of which have been abandoned.

Michigan Central Station, once a mighty monument to the city’s greatness, has been reduced to a monument of its fall.

The University Club was one an exclusive spot for the city’s educated movers-and-shakers. As those movers-and-shakers moved out to the suburbs, it eventually closed. Arsonists then torched the place in June 2013, and it was torn down that November.

The old Detroit Dry Dock building, also known as the Globe Trading Co. Building, was one of the city’s most historic remaining industrial sites. The state demolished most of the building, saving part of its facade for a new outdoor adventure center along the river.

The former Studebaker Plant burned in a fire in 2005 and was replaced by this housing facility for homeless veterans.

The abandoned and rundown Kendrick Manufacturing Co. was incorporated into the University Prep School.

Miller High School was closed. Today, it again serves the children of Detroit.

Orchestra Hall was left to rot after the Detroit Symphony Orchestra moved to the since-demolished Ford Auditorium. Here, see how the building looked in 1970, and how it was saved.

Orchestra Hall was left to rot after the Detroit Symphony Orchestra moved to the since-demolished Ford Auditorium. Here, see how the building looked in 1970, and how it was saved.

The Book-Cadillac Hotel was once the city’s most famous and glamorous hotel. Everyone from Katharine Hepburn to Dr. Martin Luther King Jr. stayed there. Baseball legend Lou Gehrig collapsed on its grand staircase, the beginning of the end. The hotel closed in 1984 and was left to rot. Today, it has been reborn, a symbol of the city’s latest renaissance.

The Dequindre Cut is being converted as a rails-to-trails project from an eyesore into an asset.

The Fort Shelby Hotel closed in 1974, long a ghostly example of blight. Today, the hotel has reopened as a Doubletree Guest Suites, and its ballroom was restored.