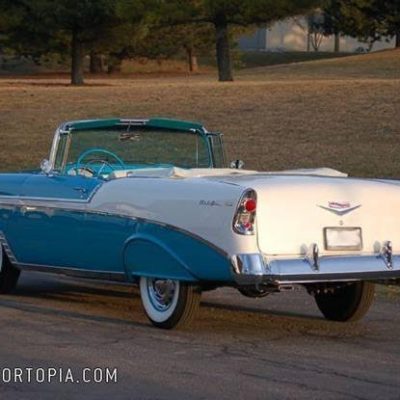 The proud owner of a magnificent 1956 Chevrolet convertible, wrote to say he had restored the car to perfection over the last few years, and sent this:

On a very warm summer afternoon he decided to take his car to town.  It needed gas, as the gauge was practically on empty, but he wanted ice cream, so he headed first to his favorite ice cream shop.

He had trouble finding a parking space and had to park the car down a side street.

He noticed a group of young guys standing around smoking cigarettes and eyeing the car rather covetously.  He was a bit uneasy leaving it there, but people often take interest in such an old and well-preserved car, so he went off to enjoy his ice cream.

The line at the ice cream shop was long and it took him quite a while to return to his car.  When he did, his worst fears were realized… his car was gone.

He called the police and reported the theft.

About ten minutes later the police called him to say they had found the car abandoned near a gas station a few miles out of town.

It was unharmed and he was relieved.  It seems just before he called, the police had received a call from a young woman who was an employee at a self-service gas station.  She told them that three young men had driven in with this beautiful old convertible.  One of them came to the window and prepaid for 20 dollars worth of gas.

Then all three of them walked around the car.  Then they all got in the car and drove off, without filling the tank.

The question is, why would anybody steal a car, pay for gas that they never pumped and then abandon the car later and walk away?